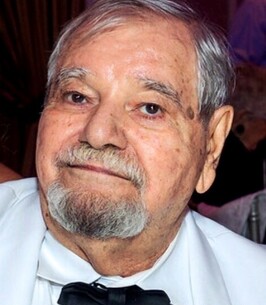 The funeral is from the Mastapeter Funeral Home, 400 Faitoute Avenue, Roselle Park, on Tuesday, January 11, 2022, at 9:00 a.m. A Funeral Mass will be offered at Church of Assumption in Roselle Park at 10:00 a.m. Interment is at Graceland Memorial Park in Kenilworth, N.J. Visitation is from 3 to 7 p.m. on Monday.

DUE TO THE COVID-19 PANDEMIC MASKS MUST BE WORN OVER THE NOSE AND MOUTH INSIDE THE FUNERAL HOME.

Born to Frank and Mary (nee Pace) Signorello in Elizabeth, N. J., Joe and his family moved to Roselle Park in 1948. In 1960, he married Grace Piscopo where they raised their four children. Soon Joe became involved in Roselle Park’s Pop Warner league at the end of their inaugural season. He held several key roles during his involvement including president for two years followed by vice president and finally general manager for several years.

At about the same time in 1969, Joe was also instrumental in the coaching of Roselle Park’s youth specifically seven-year-olds, this time with the Church of Assumption Baseball League for a few seasons until this league folded. Joe was more than happy to continue his work and helped formulate and oversee the “Clinic” category of the Roselle Park Youth Baseball League.

Through Joe’s involvement with Roselle Park’s youth and athletics over the years, he decided to become involved with educational causes as well when he ran for and was elected as a member of the Roselle Park Board of Education in the spring of 1975. While on the board of education, Joe was responsible for many positive initiatives that benefited the students of the Roselle Park School District. Joe remained on the board until 1987.

While Joe was raising a family and volunteering, he also was co-owner of Frenchy’s Bar and Grill with his father. Having a business in town, Joe has sponsored many organizations and individual teams over the past fifty years. In fact, Dad’s Club has been meeting in their basement hall for over thirty years now. Some of the young men that he had coached over the years became softball players on one of the many teams he sponsored locally in Union County.

He was predeceased by his beloved wife, Grace of 54 years, his grandson, Anthony, and his parents, Frank and Mary.

Joseph is survived by his four loving children, Susan Carlstrom and her husband, Calvin; Joseph, Jr. and his wife Antonette; Frank and his wife, Elizabeth; and Thomas; a sister, Dolores Manfria. Joseph also enjoyed the love and accomplishments of his grandchildren, the mayor Joseph, III, Cassandra and her husband Gabriel, Marc, Thomas, and Tyler.

In lieu of flowers, remembrance in Joseph’s memory can be made to Church of Assumption, 113 Chiego Place, Roselle Park, N.J.07204